swim in a sea of potential language

a series of short samples of Claron McFadden’s voice speaking and singing vowels, consonants, phonemes and syllables were recorded and assembled to create a sound space filled language elements – a moving sound collage, a sea of potential language

during a performance of this piece the singer moves through this continuously shifting sea of potential language and attempts to find words emerging from out of the sound collage – she might find already existing words, new words or words in a language she does not know – the emergent language of new words, known words, unknown words, cut-up words and semi-formed sentences provide clues and keys to her thoughts and associations 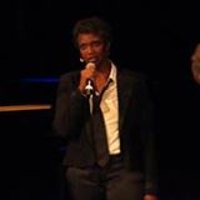