In this project created by me: hilary j e f f e r y (#hiljef), elements of language and music are used as navigational tools for inner exploration. Wide research is carried out and distilled into a series of studies consisting of concise instructions for individual performers which combine text, sound and image as a means to enter into introspective states. Compositions for exploring the territories uncovered by the instruction-studies are created for and performed by mixed-media ensembles. The most important aspect of this project is its focus on inner states in language and music, to create tools which aid introspection and to express this process in a new form of language-music. The research navigates spaces between language and music, opening doors for performers and listeners to discover their own unique internal worlds.

Personal and intuitive interpretations of possible meaning appear in an emergent music which is filled with ‘potential language’. A simple example of this is: a recording of a voice which sings and speaks in an unclear way, giving room for personal interpretation of the actual meaning. Meaning is not imposed from outside but discovered within, giving a wide variety of possible understandings. Participants are encouraged to go on individual journeys of association and interpretation, utilising musical areas which are definitively introspective and discovering tools for exploring consciousness.

This project is a study of the music of language and the language of music, focused on the exploration of spaces where music and language can co-exist. Clearly expressed and understood language can give unequivocal meaning, whereas music can be subject to very individual interpretations. At the same time language can be unclearly expressed or heard differently than the way it was intended, giving wide space for subjective interpretation and misunderstanding, whereas music can function non-verbally in a very direct way.

The basis and fundamental material of both language and music is sound, but both understandable meaning in language and also the essence of music exist beyond, behind or in-between sound, in seemingly abstract spaces. At the same time pure sound is the ‘real world’ material for all potential music and every language, the primary ground which can be explored to discover connections between language and music, where they meet and how they differ. The research and results of this work exist in territories between music and language, a place without an obvious stylistic clarity or a definite meaning, an area which can clearly specialize in being ambiguous. By approaching and consciously inhabiting such an ambivalent space one is gradually able to access the roots of one’s own thoughts, hearing them as actual entities, sometimes without any recognisable linguistic content. Through these paths, one gains insights into processes of idea formation in a pre-linguistic state, a yet to be formed condition, filled with with the potential of several possible interpretations.

The area of inquiry is very wide including such subjects as: linguistics, semiotics, poetry, composition, voice art, hypnosis and the use of language in psychotherapy. A broad study and general knowledge of these key areas helps to inform several sound experiments with voice, instruments, recording and sound processing techniques.

#ilm is a long term project which will have numerous phases of activity. Musical and linguistic structures will be explored through concentrated experiment, resulting in a new hybrid form of mixed-media sound art and music, with possible scienific applications. The research results take the form of studies for solo performers and compositions for ensembles combining text, notation, graphic and audio design. Each study is considered to be an instruction or set of instructions for a specific performer to carry out, often functioning as a guide to the exploration of inner-space. Compositions are created with the materials generated by the studies, combining and mixing them to form large scale journeys – carried out in intensive group workshops by troupes of intrepid travellers in installation based concerts. Listening audiences are also an essential key to all aspects of this work. 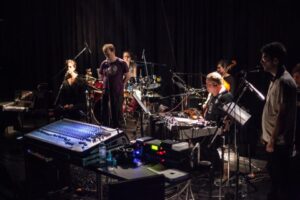 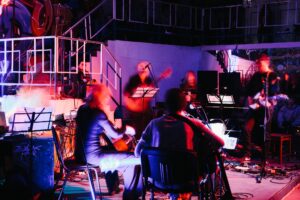 The third phase started in 2021 as a collaboration with the writer, poet and translator Esther Kinsky, supported by Musikfonds e.V.